The topic of part 2 of this series is about what happens to negatives as soon as they are scanned.

Part 1 was about how I scan my negatives, you can read it here.

Generally after I develop my film I try to scan it as quickly as possible, however that is not always possible due to the lack of constant scanner access. As general naming conventions for my films, I label each roll of film I shoot sequentially. That means that my first roll of is called FILMNR1 or 1, second is FILMNR2 or 2 and so on. Of course, that doesn’t work perfectly as I might shoot with 2-3 cameras at the same time. So the counter is just a rough indication of sequentiallity. The assigned counter is per film type, so there will be one FILMNR1 for 35mm film, one FILMNR1 for medium format film, which I would call FILM66NR1 (for 6×6) and one FILMNR1 for large format film.

After scanning my negatives film by film, I copy the pictures to my own computer. You can read more on the scanning process itself on this post: Part 1. I will file all pictures from one film into a single folder dedicated to that roll of film and name it like this: $FILM#:$FILMTYPE:$FILMSPEED, so for example “2PORTRA400”. That indicates that it is FILMNR2 and the film type is is Kodak Portra 400. For pushed film, I would call the folder “4TRIX400AT1600”.

Inside the folder, I will rename all files to a combination of the film number, a sequential number and the brand of scanner used. The name will be: $FILMNR_$IMAGENUMBER_$SCANNERBRAND, so for example: “NR33_IMG02_nikon.tif”. So that is the second shot on film number 33 scanned by a Nikon scanner. While the index on negatives often starts before 1, I will still label the first image as “1” so that counting the negatives to determine the correct image is possible without having to read the tiny numbers on the negative itself. The reason for putting the film number first and following with the image number is simple: when importing the film into Adobe Lightroom or any other program, you can get a nice chronological order of images simply by sorting by name. I do that because the “capture time” metadata sorting is mostly useless for film scans, as it depends on when the image was scanned rather than taken.

After I numbered the film, put the files into the correct folders and named the files aptly, I will process the files. This is just basic processing but it makes sense to do before importing it further into Lightroom or other library management programs. Usually, I will open all images in the folder in Photoshop to do three things: 1. crop the image to the correct aspect ratio, 2. rotate the image, and 3. remove any scratches/dust from the negatives. Usually I save the files as TIF, although I have also experimented with scanner native digital negative formats like .NEF files for Nikon scanners, but came to the conclusion that they provide little benefit (smaller file size) while being a significantly larger pain in the ass to handle.

Then, I will add the appropriate metadata to each picture. I usually do that directly in Windows Explorer which works well enough, although there might be tools better for the job. I simply select all pictures in a folder, right click and then go to “Properties”->”Details” where I’m able to edit/add metadata. The metadata I add is the camera I took the picture with, lens & focal length (if I remember – wrong metadata is worse than missing metadata), the film ISO and the camera/lens serial number (you never know…).  Last, I will add certain keywords:

To organise, edit, and export my pictures I personally use Lightroom so the last step of this workflow will largely depend on which (or if you do at all) picture catalogue program you use. Because my laptop SSD is small, I don’t have one huge Lightroom catalogue but many small ones. Generally, I create one catalogue per event: e.g. vienna_16 for a trip to Vienna in 2016, and general catalogues per year: e.g. if I live in Berlin I’d call it berlin_17 and include all pictures taken in and around Berlin in 2017 in it. That allows me to selectively move Lightroom catalogues to an external disk or move it back to my computer for more speed when I know I will be using that picture set a lot. Sometimes if I know that I’ll be mostly doing culling/basic editing only and don’t want to take my HDD with me, I will create Smart Previews of all pictures in one catalogue and then move the original image files to the HDD to save space.

Keeping an Overview of all Rolls of Film

Now, to come back to the actual negatives, I track all my shot rolls of film in an Excel sheet. As my actual negatives are stored all over the place I want to keep track where they actually are, should I even need to rescan a file. Or of course view some positives on a dia projector. That way I also know what my most recent film number is when I don’t have access to all films, as I might not have my HDD with me. In the same Excel file on different sheets I also track all my owned cameras with their lenses, serial numbers etc, which makes it easy to just copy and paste that data into the metadata fields in Windows Explorer.

The next topic I want to write about will be about file backups. Stay tuned 🙂 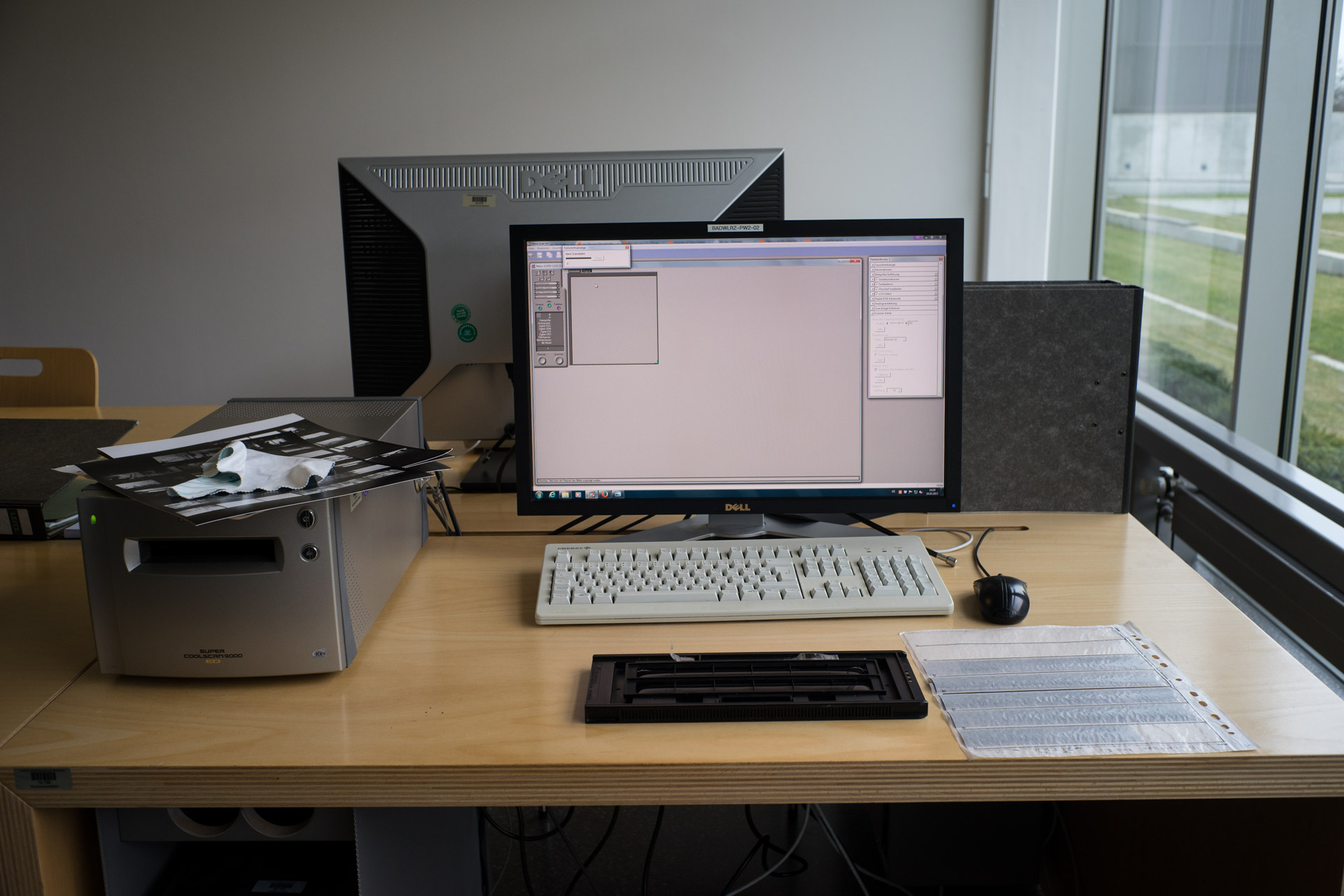 In this series, I want to describe and share how I handle my physical pictures and scan and store them digitally.

Part 1 will be about the scanning process itself and part 2 about storing and categorising the files.

I’m fortunate enough that I have access to a film scanner at the school I’m studying at. Actually, I have only once seen someone else use it, so I live in constant fear that they will get rid of it… The scanner is a Nikon Coolscan 9000 ED, which is kind of old but still produces incredibly good looking scans. However, lately it seems to have developed a problem when dealing with large solid colour areas, which appear to have vertical stripes across them (in the form of slight but noticeable luminance variations). That issue is very annoying and not easily fixable in post unfortunately. Apparently I am not the only one with the problem but as it is not my scanner I cannot do anything about it…